The Past and Future of Knowledge Graphs

Knowledge graphs integrate information about topics of interest and identify connections between them. The term knowledge graph first appeared in print in the 1970s, referring to modular components of academic courseware. Academic use of the term in the 1980s and 90s referred to the design of semantic networks. In 2007, graph-based knowledge repositories were developed for general-purpose information. In 2012, Google began using Knowledge Graph to describe a data model that would let them disambiguate concepts and retrieve relevant information about search targets and potentially related information.

The meaning of the term knowledge graph will likely continue to splinter and shift as it has in the past. Within the various present uses of the term, we can see some common elements, including the relationships between abstract or concrete classes, a flexible schema, a means of interrelating any arbitrary collection of items, an ontology that can be read by both humans and machines, and a general structure expressed as a sometimes loose network of entities, properties or relationships. 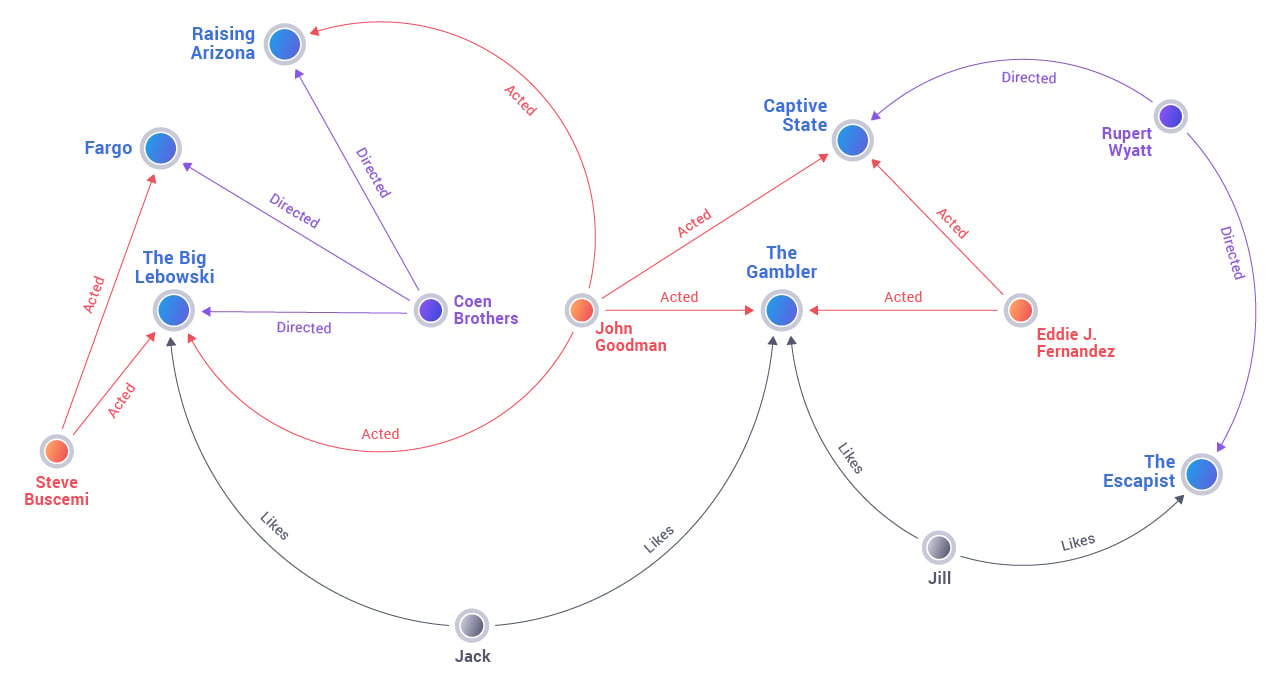 As a trivial example of a visual representation of a knowledge graph, consider the above diagram showing relationships between movie directors, actors, and the preferences of two viewers named Jack and Jill. The diagram shows that Jack likes The Big Lebowski and The Gambler, which have different directors but both feature John Goodman in a starring role. Jill likes The Gambler and The Escapist, which share no common actors but are both directed by Rupert Wyatt. From this information, given no better basis for reasoning, we can infer that Jack may like other movies starring Goodman and Jill may like other movies directed by Wyatt. We can also infer that Jack and Jill may enjoy watching the movie Captive State together since it stars John Goodman and is directed by Rupert Wyatt.

Now imagine a sparsely populated graph of eight million titles and 100 million reviewers. Imagine all the real-world problems such data and its storage system, whether structured or unstructured, would contain — viewers having multiple names or identities, versions of film title with and without a leading “The,” viewers who have changed their minds on second viewing, and so on. Then include sparsely populated food and automobile preferences of the viewers, along with attributes like profession, age, and location. What surprising conclusions could emerge from this data? Can food preference predict movie taste? This is the world of knowledge graphs.

One thing immediately obvious is the colossal number of combinations of items this graph would contain — the impossibly large number of lines present if we expanded the above diagram to contain all the real-world entities. While such a graph might contain pearls of immense potential value, their value might never be realized in the time that conventional computation would require.

Knowledge graphs roughly equivalent to the immense graph described above are becoming more and more prevalent in enterprises, government agencies, and university research. The increasing prevalence of graphs can be attributed to changes in the way we think about big data and to advancements in technology, particularly the ability of machines to process data. Still, in recent years the rate of data growth has outpaced most improvements in computational capability.

Schedule a meeting to learn more about the use of knowledge graphs for your business.

Quantifying the Business Value of Graph

The more data a business needs to collect and use, the more knowledge graphs become necessary. But.

Google introduced the term knowledge graph in 2012, referring to a general-purpose knowledge base.

One of the most fascinating concepts to emerge from Facebook was the social graph. Basically,.